The Liberty is an express train that runs on the same route as the Limited Express Spacia, but it should be noted that its mode of operation is slightly different.

In this issue, we will explain its main stops, ticket reservation methods, and express fares in an easy-to-understand manner. 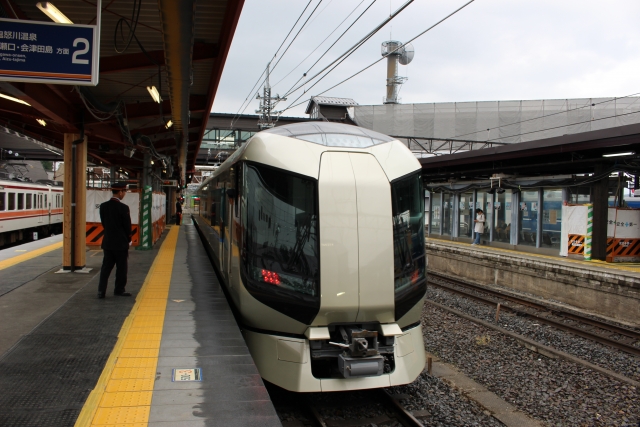 What is Express Liberty?

The Limited Express Liberty is a train that can go to Nikko, Kinugawa, and Aizu Tajima without changing trains by connecting three-car trains.

Conventional Limited Express Spacia trains require passengers to change trains at intermediate stations depending on the destination and destination of the train.

However, in the case of the Limited Express Liberty, each train can be separated according to its destination, making it possible to go to the Nikko and Kinugawa areas without changing trains.

From Asakusa to Tobu Zoo Park and Shimo-Imaichi, the trains run as a consolidated train, and from there on, the trains are split into those bound for Nikko, Kinugawa, Aizu, and Tatebayashi.

The name of the train depends on the destination.

The Limited Express Liberty has slightly different stops along the way.

The Liberty Kegon, Kinu, and Aizu trains stop at the following stations

Only some trains stop at stations marked with (*).

Liberty Kegon-Kinu-Aizu trains operate in a consolidated fashion until Shimo-Imaichi, and from there they split up to go to their respective destinations.

The Liberty Kegon Ryomou stops are as follows

In the case of the Kegon Ryomou, the splitting and merging operations take place at Tobu Zoo.

For the Liberty Ryomo, these trains provide excellent access to the Ryomo area in Tochigi and Gunma, and directly connect to the Tobu Isezaki Line.

Note that the Liberty stops at different stations from the Kegon, Kinu, and Aizu Liberty trains.

Since the Liberty is an express train, an express ticket is required in addition to the boarding ticket (fare).

There is no difference in express fares between weekdays and holidays, and express fares increase according to distance, so it can be said that the fare structure is easier to understand than that of Limited Express Spacia.

How to make a reservation at Liberty

If there is no Tobu Railway station nearby, we recommend that you make reservations through the “Tobu Railway Internet Reservation Application”.

Express tickets can be reserved from 9:00 a.m. one month prior to the date you wish to board the train.

Although the Liberty Express has only three cars per train, it has all the necessary on-board facilities to make the journey to your destination a pleasant experience!

I have actually used this train myself and found it to be very comfortable. I can say that the newer train cars offer outstanding comfort!

However, due to the space limitations of the train, unlike the Limited Express Spacia, there are no in-train sales or private seats, so be careful about that!

Summary: Great express train, both in convenience and comfort!

The Limited Express Liberty is a very comfortable and convenient train, thanks to the use of the latest new train cars!

This train is very convenient for access to Nikko, Kinugawa, and Aizu Tajima area, so if you are going to Nikko or Kinugawa, why not take the Liberty?

We hope the above information helps you.

This time, we would like to introduce you to JR Tokai's Nanki Limited-...

In this issue, we bring you a report on Kintetsu's popular express tra...