We have compiled all the necessary information on the differences between the Sunrise Izumo and Seto trains, how to make reservations, fares by room, notes on reservations, and how to get the best deals.

If you are considering making a reservation for the Sunrise Izumo/Seto, please take a look!

*We make every effort to update the latest information, but please double-check the timetable and boarding fees when you actually purchase your tickets!

What is Sunrise Izumo & Seto? 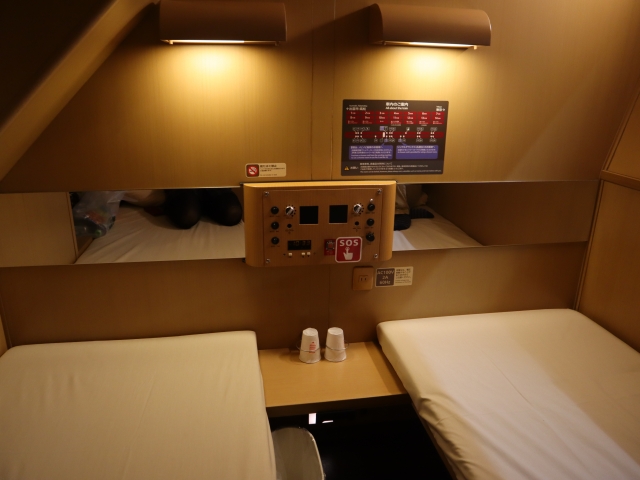 The Sunrise Izumo and Seto are both sleeper trains operated with the Sunrise Express carriages.

It is the last sleeper express train in Japan that runs regularly every day. With its clean interior reputation, which has also won a Good Design Award, the train is so popular that there is a waiting list for its operation on holidays.

Difference between Sunrise Izumo and Seto

The difference between Sunrise Izumo and Seto lies in the destination.

As shown in the illustration, the Sunrise Izumo and Seto trains depart from Tokyo Station with their cars connected to each other, and upon arrival at Okayama Station, the cars are detached and run toward their separate destinations.

Conversely, in the case of the up train, they depart from separate locations, meet at Okayama Station, and head for Tokyo Station.

How to make reservations for Sunrise Izumo & Seto

Sunrise Izumo tickets cannot be reserved online. The general procedure is to go to the Midori-no-Madoguchi counter to purchase tickets. (Other ways to obtain tickets are described below.)

Tickets can be purchased at the Midori-no-Madoguchi counter from 10:00 a.m. one month prior to the boarding date. If you are planning a trip, it is best to secure tickets early.

The fare for the Sunrise Izumo/Seto train can be calculated as the sum of three fares: fare, limited express fare, and sleeper berth fare.

Fares and express fares are uniform, but sleeper fares differ for each of the six rooms. In this issue, we have compiled the fares for the Tokyo – Izumo route.

【Fare for a ride between Tokyo and Izumo】

Points to note when making reservations

Here are two things to keep in mind when purchasing tickets for Sunrise Izumo/Seto.

Note the date of ticket purchase.

However, if you are boarding at Shizuoka or Hamamatsu Station, you will need to purchase a ticket dated April 1, since the departure time of the train crosses the date.

The staff will probably confirm this with you when you purchase your ticket at the Midori-no-madoguchi (ticket window), but please be aware of this.

Once you have purchased a ticket, you may not be able to board the train because you have something to do.

Sunrise Izumo tickets can be refunded at the Midori-no madoguchi (ticket office) before the train departs. If you wish to request a refund, a fee will be charged as follows.

Note that if you purchased tickets and tickets with a credit card, the card used will be required for refunds.

How to take the Sunrise Izumo/Seto at a discount

There are two other ways to make reservations for the Sunrise Izumo besides purchasing tickets at the Midori-no-Madoguchi.

If the conditions are met, you can take the Sunrise Izumo train at a lower price than usual, so we would like to introduce them to you.

Find tickets on auction sites such as Yahoo!

Sometimes tickets are sold through online auctions such as Yahoo!

If you are lucky, you may be able to find tickets for the date you want. If you want to get the best price, you may want to check out these auctions.

Some travel agencies offer tours that include tickets for the Sunrise Izumo and Seto trains.

Below is a chart comparing a 3-day/2-night tour that includes a ride on Hankyu Express’ Sunrise Izumo between Tokyo and Izumo City by outbound: Sunrise Izumo (Nobi Nobi seat) / inbound: Airplane (JAL) with a tour that you arrange by yourself.

As an example, a tour will cost much less than individual transportation and lodging costs for a round-trip trip.

In addition, since there is no need to arrange tickets individually, tours are recommended for those who want to save time and money.

If the tour content is in line with your expectations, we encourage you to take a tour.

We introduced how to make reservations for the Sunrise Izumo/Seto train, the timetable, the fare, precautions for reservations, and how to save money.

This time, we would like to introduce you to JR Tokai's Nanki Limited-...

This time, we would like to report on the "Limited Express Sazanami" r...