In conclusion, staying one night at the airport at Chubu International Airport is..

Centrair is derived from Central (Central) and Air (sky).

The welcome garden on the first floor, the arrival lobby for domestic and international flights on the second floor, and the access plaza (where there is a Meitetsu train station, entrance to parking, and a wifi rental area) are open 24 hours a day.

The terminal building is open from 4:40 am

There are smoking areas, waiting rooms, 24-hour convenience stores, toilets and capsule hotels, etc., which are suitable for early morning and late night flights, and facilities are enriched.

When I headed to the access plaza, I saw some people staying at the airport.
I found such a bench that can extend my feet by the toilet! ! And there are no people! !

I laid here without hesitation (laughs) The sofa wasn’t too hard and felt good <^^>
There was also a coin locker for those who were worried about the carrying case being stolen while sleeping.

Because This is a very large locker, you can store most of your luggage.
The fee is $ 600 each time.

But there’s the problem

Here, escalators and TV announcements are always flowing, so earplugs are essential
Plus it’s cold! !

There is an escalator and an elevator that are connected to the parking lot, so the outside air can flow in quite a bit, and because Centrair is on the sea side, it’s extra cold, …, …

So, I moved to the arrival lobby on the second floor in search of my next sleeping place.

Arrival lobby on the second floor

I moved from the access plaza to the arrival lobby on the second floor across the connecting bridge.

Then there was a lot of benches here, and there was no railing and it was not cold so I could lie down and sleep soundly. 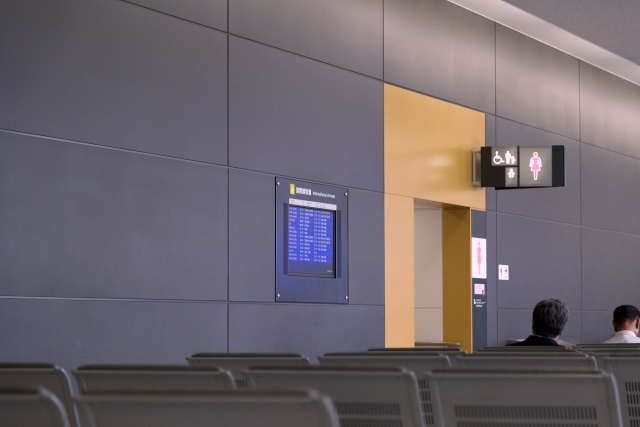 In addition, since there are also charging spaces, you can kill time by touching your mobile or PC besides sleeping.

The security of Centrair is not bad

I thought that the security of Centrair was not bad and even beginners at the airport could easily get used to. (This is my first night at the airport.)

Security guards also patrol, and some women were sleeping alone.

Abundant accommodation facilities such as hotels

If you are concerned about security and the environment, you can use these hotels.

There are so many options, so it would be sure to make a reservation in advance.
There is Toyoko Inn which has a free parking lot campaign, so those who come by car want to make effective use ,Their parking is available for free for 240 hours.

This time, I introduced staying one night at Centrair.
To conclude, Centrair is relatively easy to stay at the airport.

There are many benches that can be laid down and there are convenience stores that are open 24 hours a day, so I think that there is almost no problem.
There are also hotels near Centrair even if you are uneasy about field lodgings, so it would be great if you could travel a lot with cheap flights while using them! !

They are located near from Fushimi Station. I stayed at the Hamilton H...