This park is located on the waterfront of Kobe Port, next to Kobe Tower and the Kobe Coastal Museum, and is also known as the Kobe Port Earthquake Memorial Park. The damaged shore walls and tilted street lights have been preserved in their original state, allowing people to witness the intensity of the disaster. Nearby is an exhibition space with a display of photos of the Great Hanshin and Awaji earthquakes and other materials that show the devastation at the time. In addition, you can learn how people in Japan and abroad worked together to rebuild after the earthquake. 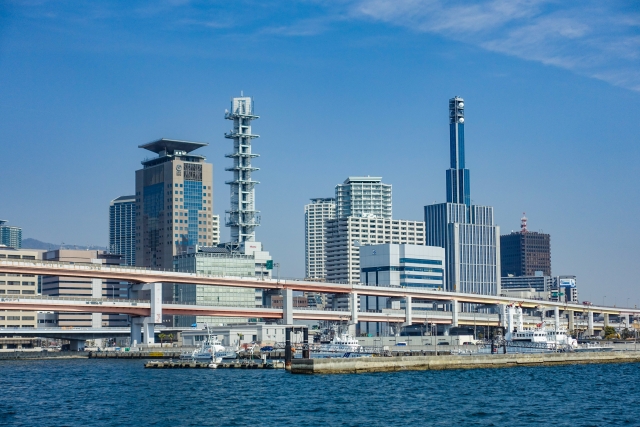 It’s in the Kobe port area, with a beautiful night view, a park commemorating the Great Hanshin Earthquake, a Starbucks and a nautical museum.

I was reminded of the song “I want to go to the beach with you and blow the wind”, and that’s how I felt about Kobe Port. I queued for a long time, but unfortunately the person behind me didn’t take all the letters, so I had to tell him how to take the picture.

It’s a great place to take photos! It’s quite comfortable and relaxing! Be sure to go in the afternoon and stay from late afternoon until dark!

The summer evenings are very beautiful and it’s worth taking your time to go around for a few hours without the heat of the day. And the umie across the street is great for shopping too.
Kobe Port’s top hotels with sea views, the Kobe Minato Onsen Lotus on the First Embankment, the La Siete Hotel and the Melikepark Oriental Hotel are all great places to see the night view and the fireworks without leaving home, and you can also see the 50-metre-high Ferris wheel in the Houbara district from here.

The famous park next to Kobe Port is where the first American black ships landed in Japan. It is now an important tourist port in Kobe. I thought the park would be big, but the main body of the park is actually very small, as is the Kobe Port Tower, and there are no sea views in the park, so there is no need to visit the park if you are not here to take a cruise.

The tourist information centre was staffed by a Chinese woman who enthusiastically introduced me to Kobe’s loop bus and highly recommended it, telling me “It’s Sunday and there’s a discount for buying a one-day ticket”. I said I wanted to walk and didn’t need a day pass, and besides I had to go to Himeji in the afternoon and I only had about three or four hours in Kobe. As soon as she heard that I was going to Himeji, she told me that I should “catch a bus at Kobe station” and suggested that I should not backtrack and return to Sannomiya station to catch a bus. She also helped me to design a tour route, saying that I only needed to take one ride, and that after seeing the Inhuman Museum, I should take a ride to Kobe Port to see the American Park and Kobe Port Tower. It’s not far from Kobe port to Kobe train station, so you can walk all the way there.

It’s actually a public area around Kobe Port, so you don’t need an entrance fee and can walk around as much as you like.
I went there after dinner, and the night view is very nice, with the Kobe Tower, the Kobe Sea Museum, and the Kobe Harbor lit up at night.
There is also the American Park Oriental Hotel, a charming building that used to appear in the Japanese drama “Smoke and Mirrors”.
A cruise ship docked at the same time, so I watched it from the railing.
There was supposedly a display of the Hanshin earthquake, but it was dark at night, so I didn’t see it.

About Yamashita Park This is a park facing the sea, and the most famo...

About This is a commercial shopping street with many stores and bouti...

About Shurijo Park The main gate of Shurijo Castle, next to it, is be...