SL Taiki is the nickname of a steam locomotive (SL) train operated by Tobu Railway between Shimo-Imaichi Station and Kinugawa Onsen Station on the Kinugawa Line.

SL Taiju is a train that runs between Shimoimoichi and Kinugawa Onsen.
The steam locomotive, familiar with the steam whistle called “Poppo,” carries you on the train.

If you are traveling to Kinugawa, this train is a must experience. 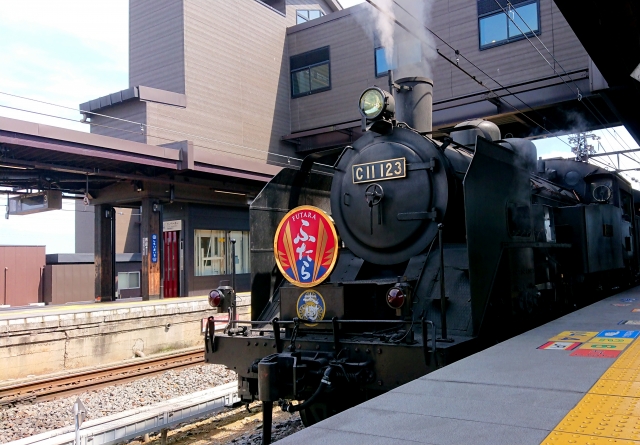 There are three locomotives running: SL Taiju, SL Taiju Futara, and DL Taiju!
As for how to make reservations and the fare, keep in mind that a seat reservation ticket is required in addition to the train ticket!

Depending on the day, SL Taiju Futara will run through Tobu Nikko – Shimo-Imaichi – Kinugawa Onsen!
Fares are as follows. (red is the fare for seat reservation tickets)

And there are two main ways to make reservations.

Reservations and purchases on the Internet

You can only purchase tickets by credit card, and you can even select your seat on your smartphone.
Then, on the day of the ride, you can simply board the train ticketless.

On the other hand, if you make a reservation, you register your phone number and e-mail address online and purchase your ticket at a manned ticket counter at the station.

When you purchase your ticket, you can even choose your seat!

Purchase at the station counter

The second method is to go directly to the station and purchase the tickets.
Of course, you can buy tickets at the station counter without using the Internet.

If there are seats available on the SL Taiju, you can even buy them on the same day!

When I was waiting for the Taiki at Shimo-Imaichi station, an announcement was made that there were seats available.

However, on weekends and holidays, the train may be full, so it may be a good idea to make a reservation or purchase a ticket online in advance.

This is because the beautiful nature of the Nikko mountain range and Kinugawa River seen from the SL Taiju is easier to see from these seats.

SL Taiju began daily service on July 31, 2021.
This is because two trains are now running.

If you want to ride SL Taiju, go by “Liberty” or “Spacia”.

SL Taiju trains depart from Shimo-Imaichi Station and Kinugawa-Onsen Station.
Therefore, those coming from Tokyo or Saitama must first go to the first station.

Tobu also has express trains such as “Liberty” and “Spacia.
You can take the fast express train first for a comfortable trip, and then take the SL Taiju for a relaxing train ride!

Rapid Airport is a rapid train (and some special rapid trains) operate...