And since Daejeon Station and Seodaecheon Station are not connected by the Korean Railroad, you need to take a bus or subway.

When I went from Seojeon Station to Daejeon Station, I initially planned to take a bus, but I did not know which bus to take, so I took the subway.

The Globe-Trotter said that the subway station was almost a kilometer away, but in fact it was not that far. 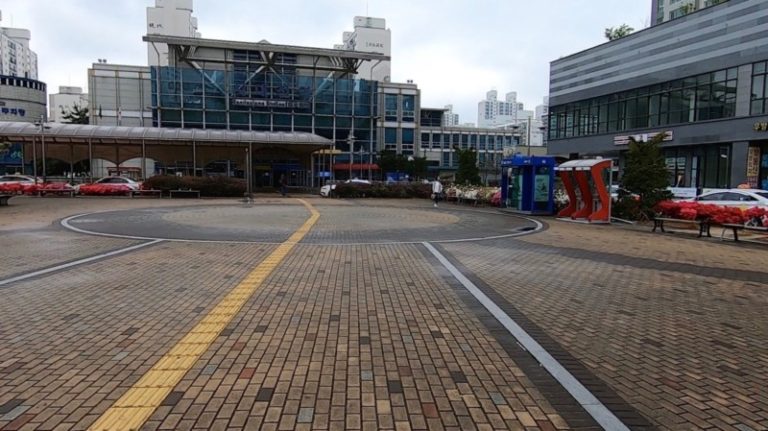 I arrived at this station after taking a few random trains, but in order to get to Busan, I needed to go to Daejeon Station, which is a few kilometers away from here.

I found what looked like a bus stop, and the number 612 bus is running, but I am not sure which direction to take the bus going in.

If I get on the wrong one, I will be taken to an unknown place, which is a problem.

Furthermore, there are no instructions on how to get on the bus, so I don’t know what to do!

At a loss, I looked at the Korea map on Connect, and found that the Goryong Subway Station on Subway Line 1, which goes to Daejeon Station, is located about 500 meters away, so I decided to go there by subway.

Incidentally, the Seodaedaejeon Negori Station is one stop away, so you can also go there.

Turn left at first on the big street in front of the station.

Walk for a while with Costco on your left.

After a short walk, you will see the entrance to the subway station.

It took me about 10 minutes to reach this point from in front of Seo Daejeon Station.

I couldn’t help but wonder what kind of Korean hot spring resort I could reach by subway, so I decided to take a detour in the opposite direction before going to Daejeon Station.

Of course, I could use the “T-money card” that I had purchased in Busan.

I used the Korail Pass to ride all the trains in Korea for 3 days. ...