The temple was built in 1876 by overseas Chinese living in Yokohama. It occupies a large and grand area, with a high main hall and traditional Chinese style architecture. If you come to visit the Chinese street area, you can come to see. 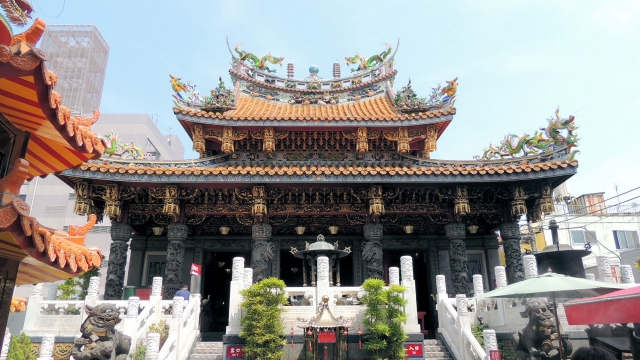 Yokohama is the center of the Chinese community in Japan, which can be understood from Yokohama’s China Street and Guan-Di Temple. When you go to Yokohama’s China Street, you have to go to see the Guan-Di Temple first. The magnificence of that gilded temple is even more breathtaking than ever before in China!!! Although destroyed several times, but several times rebuilt, once said to raise funds, Chinese enthusiastic, the scale is huge!!!

In China, Confucius is ranked with Guan Yu as the sage of literature and martial arts. However, for the Chinese in Japan, Guan Yu is the god of learning and business.

Yokohama Guan-Di Temple was built in 1876 and was destroyed in the later Great Kanto Earthquake of 1923 and the Great Air Raid of 1948. After the war, it was rebuilt and destroyed by fire in 1986. This is the fourth time it has been built in 1990.

The so-called cut-and-stick art belongs to the mosaic relief, and the process is simply “cutting” and “sticking”. The cut-out stained glass is glued to the pre-made model piece by piece. It is said that the artisan adds seaweed powder to the adhesive to ensure that the adhesive does not dry out within six hours, so that there is enough time to adjust the combination.

Yokohama Guan-Di Temple is an influential temple in Japan, built in the sixth year of the Meiji era (1876), then damaged twice by the 1923 Great East Japan Earthquake and the 1945 World War II air raids by American planes.

After the war, it was rebuilt for the third time, but unfortunately, it was destroyed by fire in 1986, but strangely, only the statue of Guan Gong was left intact. So this was the opportunity to form the Yokohama Guan-Di Temple Construction Committee in July 1987, widely mobilized the local overseas Chinese, Chinese, as well as Chinese associations, enterprises and financial institutions, vigorously donated to start re-building work, and received the support of overseas Chinese around Japan. After three years of united efforts, the Guan-Di Temple standing in China Street was completed in 1990.

The new temple is Minnan temple style, the main hall is 16 meters high, an area of 288.45 square meters, the temple of the Chinese white jade railings, the Sendao, stone level, the ridge of the glazed tiles and other works by the Beijing Ancient Architecture Engineering Company, the main hall and the pagoda of wood carving, interior decoration by the Taiwan swing Hua Stone Co.

Later, due to the Great Kanto Earthquake and war fires were destroyed three times, the contemporary building, completed in August 1990, this piece of traditional Chinese architectural craftsmanship cohesion of the essence of the complex, had attracted Chinese people from both sides of the Taiwan Strait to run to this project. in October 1991, the temple building of Guan-Di won the Kanagawa Architectural Competition Award of Excellence.

Then for some visitors from the motherland who are plagued by hiragana katakana, they should walk in immediately. It’s small inside, incense is strong, and Master Guan Lao is majestic. I made a wish for everyone in my family to the Master Guan of Yokohama, then left by dropping coins one by one into the merit box. Across the street from the temple is a park, but it is extremely sad for tourists that there are no restrooms in this park.

About Kamakura Daibutsuden Kotokuin For those who have seen the Great...

About Cupnoodles Museum, Yokohama This is an experiential museum that...