The present building was completed in 1950
The legend about the temple is that in 628 AD, two brothers fished for a 5 cm golden statue of Guanyin, then threw it back and into the net, and on the third time decided to bring it back to the village headman, who then hid the golden statue in his home In 645 AD its a temple dedicated to this golden statue of Goddess of Mercy.

It is also close to Tokyo’s newest symbol, the Tokyo Skytree, and offers a taste of old and new Japanese culture. As a vibrant downtown area, it attracts many tourists from Japan and abroad. 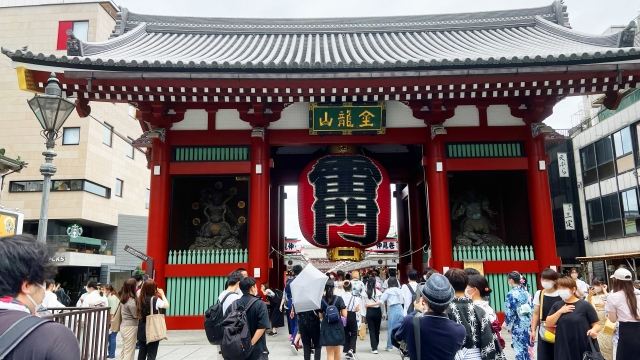 There are four stations nearest to Sensoji Temple (Kaminarimon), which is the base for sightseeing in Asakusa. However, there is no need to think too hard. It takes about 5 minutes to get there on foot no matter which station you use, so it is best to choose the most convenient line based on your starting point.

Easiest way is take the Asakusa or Ginza subway line and get off at Asakusa station, exit 1, 2, 3, or A4.
You can find out how to check the subway lines in the Tokyo Subway Guide.

1. After exiting the subway, you will find Raimen-dori (through is the street)

2. walk a little bit along the road is the Raimon Gate, the main entrance of the temple, hanging a large lantern (sponsored by Konosuke Matsushita)
3. enter the temple area is the shopping street, called “Nakamise-dori” 300 meters long, there are 150 stalls, selling ningyo-yaki, pancakes, kimono, fans and so on ~.
4. At the end of the street is the treasure gate, after entering.
On the left is the 55-meter-tall Gojyo Tower (built by Tokugawa Iemitsu), which is very famous in Japan.
There is an incense burner in the middle, and many people draw the smoke to their bodies to cure their diseases.
In addition, you can draw lots here for 100 yen. 5.
5. The main hall is in front of you! To the right and back of the main hall is Asakusa Shrine. 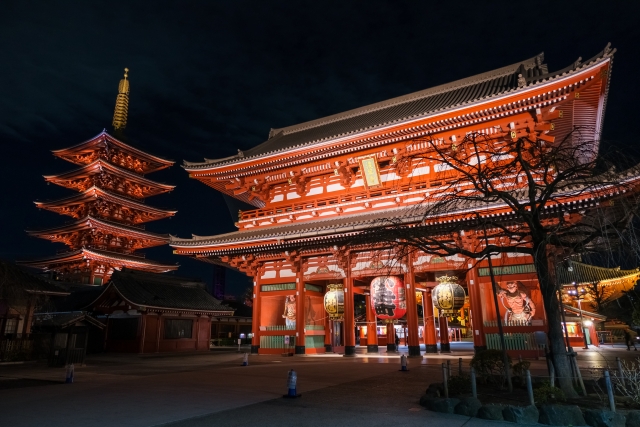 One of the most popular rides for foreign tourists is the jinrikisha. Why don’t you tour the streets of Asakusa on this uniquely Japanese means of transportation? You will feel as if you were transported back in time to the Edo period.

There are several rickshaw companies in Asakusa, and a 10-minute ride for two people costs around 4,000 yen. Some rickshaw drivers speak English and Chinese, so you don’t need to worry even if you don’t speak Japanese.

If you are planning to travel from downtown Asakusa to futuristic Odaiba, we recommend the Himiko and Hotaruna water buses, designed like spaceships by Leiji Matsumoto, the author of “Galaxy Express 999” and “Space Pirate Captain Harlock”. Sightseeing spots such as Tokyo Tower, Tokyo Sky Tree, and Rainbow Bridge can be viewed from the boat.

The trip from Asakusa to Odaiba Seaside Park takes about 70 minutes and costs 1,720 yen. It may seem more expensive than trains or buses, but it allows you to enjoy the view of Tokyo from a different perspective than on the ground.