Kashima Jingu (Kashima Shrine) is a Shinto shrine located in Miyanaka, Kashima City, Ibaraki Prefecture. It is a Shiki-uchi-sha (Meishin-taisha) and the first shrine of the Hitachiniku Province. Formerly a government-operated large shrine, it is now an annexed shrine of the Jinja Honcho (Agency for the Promotion of Shinto Religion).

It is the head shrine of all Kashima shrines in Japan. Together with Katori Jingu Shrine in Katori City, Chiba Prefecture and Kosu Shrine in Kamisu City, Ibaraki Prefecture, it is one of the three shrines in the eastern part of Japan[1]. It is also one of the shrines that is worshipped in the Shiho worship service at the Imperial Palace.

Kashima Jingu Shrine is a power spot in Ibaraki Prefecture.

It is famous for its blessings for victory, and many people from outside the prefecture come to visit the shrine. There are various ways to access the shrine, which is located close to Tokyo!

How to get to Kashima Jingu Shrine

The route is quite in demand and overcrowded, with a JR bus, a Keisei bus, and a Kanto Railway bus departing every 10 minutes!

From Tokyo Station, take the Sobu Rapid Line to Narita Line via Chiba and Narita, and transfer to the Kashima Line at Sawara to get to Kashima Jingu Station.

The time required varies depending on the transfer time, but it takes about 2.5 hours and the fare is 1980 yen.

The accessibility of the train is not so good, and you have to change trains several times.

There is a train that goes directly from Tokyo Station to Kashima Jingu Shrine in the evening, but it is inferior to buses in terms of convenience, as there is only one train per hour on the Kashima Line during the daytime.

How to get to Kashima Jingu Shrine (3) Ca

From the Takaramachi Interchange in Tokyo, take the Metropolitan Expressway Inner Circular Route, cross the Rainbow Bridge, and take the Ariake JCT toward Chiba. From there, you can go further down the road.

The journey from Tokyo Station to Kashima Jingu Shrine takes about 1 hour and 30 minutes, and the fare is 3,280 yen with ETC (the fare is from the Takaramachi IC to the Shiolai IC, which is the closest IC to Tokyo Station).

(The fare from the Takaramachi IC to the Shirogi IC, which is the closest IC from Tokyo Station, is 3,280 yen.

Here’s what Kashima Jingu Shrine is all about!

Passing through the Otorii gate, you will see the gate of Kashima Jingu Shrine a little further on.

Oku-sando is a very wide approach leading to the inner shrine and keystone of Kashima Jingu Shrine.

There is a deer park on the way to the shrine, and you can buy food at a store next to the deer park and feed the deer.

After walking along the approach to the shrine, you will see Okumiya Shrine.

Okumiya was dedicated in 1605 by Ieyasu Tokugawa, who won the Battle of Sekigahara after paying his respects at Kashima Jingu Shrine.

Natural spring water springs up here every day. That’s why the water is so clean and clear!

Kashima Jingu Shrine is dedicated to a mythical god. 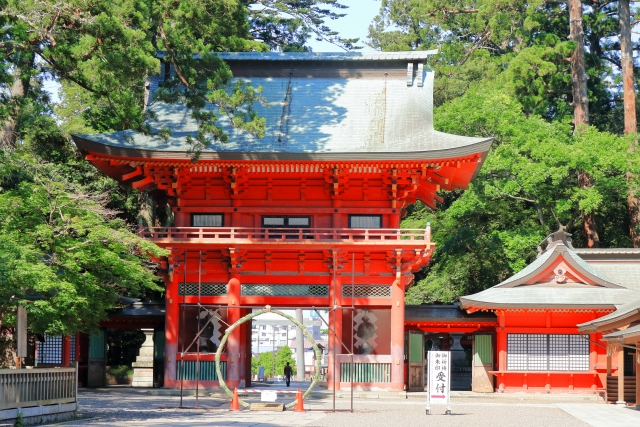 Originally, shrines often enshrine historical generals and great men as gods, but Kashima Jingu Shrine is a shrine that enshrines a mythical god!

When you are about to make a big decision in your life, or when you have a game or competition that you really want to win, why not pay a visit to the Kashima Jingu Shrine?

It will surely bring you good luck! Like Kashima Jingu, Ise Jingu is one of the shrines that enshrine mythical gods.