Goryokaku Tower is an observatory built adjacent to Goryokaku, a special historical site in Hakodate. It opened on December 1, 1964, the 100th anniversary of the construction of Goryokaku. It was rebuilt in 2006 due to aging, and is 107 meters high. 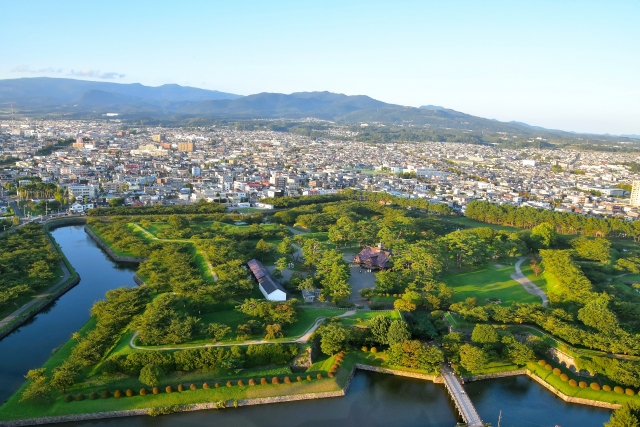 How to buy tickets and prices for Goryokaku Tower

Tickets for Goryokaku Tower can be purchased in advance or on the day of the event.

Advance tickets can be purchased at convenience stores.

Tickets for Goryokaku Tower can be purchased on the same day at the reception desk on the first floor.

Adults with 30 or more people pay 810 yen, but during the Corona season, there are not many chances to use the group discount.

Also, if you show your disability certificate, you can get a half-price discount. For adults, the price will be 450 yen.

Goryokaku’s hours of operation are as follows

There are multiple ways to access Goryokaku Tower, each of which is explained below.

The best way to get around is by shuttle bus.

Shuttle buses are available from Hakodate Station, Hakodate Airport, and Trapistine, and you can get off at “Goryokaku Tower Mae”.

Once off the shuttle bus, it takes only 30 seconds to walk to Goryokaku Tower!

There are a total of seven shuttle bus stops.

The bus stops cover all major sightseeing spots, so you can use the bus conveniently!

How to get to Goryokaku Tower by train

If you take the Hakodate Tram, get off at the station called “Goryokaku Koen-mae” and walk there in 10 minutes.

I took the tram and walked there.

Goryokaku Tower is a big tower, so if you keep it as a landmark, you won’t get lost.

How to get to Goryokaku Tower by bus

By Hakodate Bus, get off at “Goryokaku Koen Iriguchi” and walk for 3 minutes.

Where can I park at Goryo Tower?

Goryokaku Tower can be found from a distance, so you probably won’t get lost, but be careful about parking.

However, you should be careful about parking, because Goryokaku Tower does not have its own parking lot.

If you come by car, you will have to use a nearby coin-operated parking lot.

There are three coin-operated parking lots near Goryokaku Tower.

How to get to Goryokaku Tower by cab

For example, the fare from Hakodate Station to Goryokaku Tower by cab is approximately 1,300 yen.

If there are four people in the car, the fare is about 300 yen per person, which is about the same as public transportation and quite economical.

From Hakodate Station, it takes about 10 minutes to get there, making it the fastest means of transportation.

Asahikawa Asahiyama Zoo is a zoo operated by Asahikawa City in Kuranum...