For those who have seen the Great Buddha of Leshan, this is a bit small. But for those who have never seen it, it is still worth a visit, especially because it carries the historical significance of this thousand-year-old city of Kamakura, which is a more worthwhile attraction

The first military regime, Kamakura Shogunate (1192-1333), was established in Kamakura by the Minamoto Yoritomo dynasty, so during these 140 years, Kamakura, as the center of all Japan at that time, developed tremendously in all aspects such as politics, economy, and culture. However, as the central position of the Muromachi Shogunate was established, Kamakura began to decline due to exclusion. 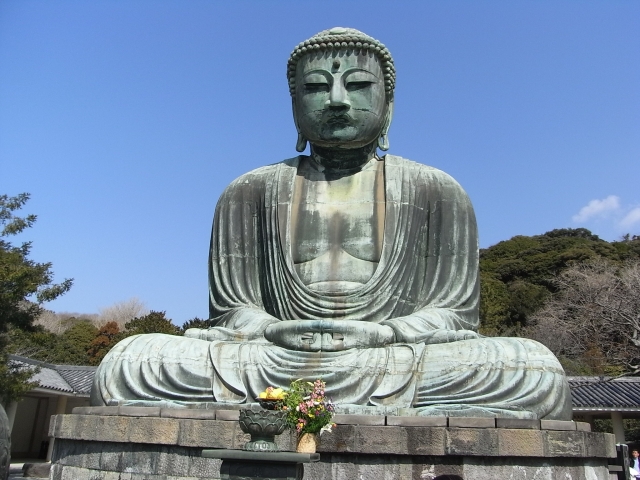 It was not until the middle of the Edo period that Kamakura evolved into an important tourist area in Japan, along with the revival of shrines and temples. The original Kamakura Daibutsu, which was built in 1238, took six years to complete with its main wooden structure. However, three years later, it was destroyed by a typhoon. So, in 1253, the bronze statue of the seated Buddha was recast.

Take Enoshima Electric Railway and get off at Nagaya Station, then walk north for about 7 minutes;

There is a bus to Daibutsu in front of Kamakura Station, get off at Daibutsu-mae Station.

The whole Buddha body is lifelike and the whole courtyard is centered on the big Buddha. Although the temperature outside is very high, but sitting under the surrounding corridor, there is still a breeze blowing through, that feeling should be called …… The heart is open …… God is happy.

There is a small ticket hall to the left of the Buddha, to enter the interior of the Buddha visit need to pay another 20 yen / adult, about 1.2 yuan.

Sometimes I think Japanese people are really strange, the interior of the Buddha can also be a visit project? How can they charge a fee? However, the price is not high, so it can be said to be a symbolic fee. Perhaps the value of faith cannot be estimated, and the form of the fee is greater than the content of the project.

The “praying in the fetus” place. The interior of the Buddha is not really big, and it is even very hot. It is indeed suitable for people of faith to spend a long time alone ……

There are two windows behind the Buddha, probably because the weather is too hot, the Buddha also needs to breathe, and the believers who pray in the fetus also need to breathe.

This Big Buddha is still standing after many disasters, and now receives daily admiration and worship from tourists around the world.

This Big Buddha cattle on the cattle in he is hollow, so … Inside the Big Buddha is possible to walk in, no, creep in and visit. Wow! This is a new thing, we did not hesitate to follow the line to enter.

It is this way into the Buddha is too difficult to walk, narrow and short passageway, the crowd is also particularly large, and had to crowd each other. This reminds me of the door of the Chiryu tea house, also short and narrow, is to allow people who come to the tea party to put aside their status, samurai swords, self-righteous sense of superiority, lower their heads and revert to an ordinary person a tea guest, meditation in the next tea party. Perhaps this “difficult” road into the Buddha, also have this meaning it …… into the interior of the Buddha, also not very shocking, because there is really no darkness and a village of the scene, it is really just – a hollow metal building interior just, out of the Buddha found Buddhism should not be so serious and rigid, but occasionally there is a sense of joy and spontaneity, which is a kind of Zen state, right?  Kamakura Big Buddha Tour

If I had to choose a landmark of Kamakura, it would be the Great Buddha of Kamakura. This Buddha, which was built seven and a half centuries ago, is a national treasure of Japan, with a net height of 11 meters. The interesting thing about Kamakura Big Buddha is that you can enter the belly of the Buddha for an additional 20 yen. Inside, it is written how the cast bronze body of the Buddha was put together, and represents the advanced craftsmanship of the time. There is also a large straw shoe outside the Buddha, which is an offering made by children.