Umishibaura Station is a station on the East Japan Railway Tsurumi Line, located in Suehirocho 2-chome, Tsurumi-ku, Yokohama City, Kanagawa Prefecture. The station is also the terminus of the Umishibaura Branch Line, and is considered a “Yokohama City” station under JR’s specific metropolitan area city system. The station number is JI 52. The Keihin Office of Toshiba Energy Systems, a subsidiary of Toshiba Corporation, is located adjacent to the ticket gate, and the ticket gate is also the entrance to the company. 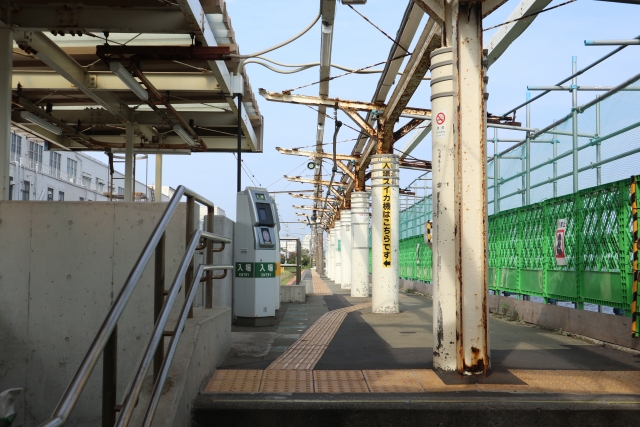 Umishibaura station is only accessible by train.

I was very curious about the fact that it is only accessible by train.
It is in the suburbs of Tokyo, in Kawasaki City if you will, and not in a very rural area, so why only by train?

With this in mind, I set out for Tsurumi Station, the first station on the Tsurumi Line.

Because the line serves people working in the factory area of Kawasaki, trains are concentrated in the morning and evening when people go to work, and the number of trains during the daytime is suddenly reduced.

The number of trains to Umishibaura also decreases to one per hour after 10:00 a.m.

It seems that the Tsurumi Line has several other destinations, not just the one to Kaishibaura Station.

Eleven minutes from Tsurumi Station, we arrived at the last stop, Umishibaura Station!

Once you get off at the station, the ocean is right in front of you…!

The sea is right next to the platform, and although it is not hot in the photo, the Tsurumi Bridge of the Metropolitan Expressway can be seen on the left side.

It’s sure to be an Instagram-worthy view!

If I were an Instagrammer around here, I would definitely take a picture of my back leaning against this fence, staring off into the distance.

I held up my PASMO over the simple ticket gate to enter the station, but to my surprise, I was told that only Toshiba personnel are allowed beyond this point.

Yes, this is why you can only take the train.

The whole area around Kaishibaura Station is on Toshiba’s property, and neither buses nor cars can come.
So you can only go there by train! 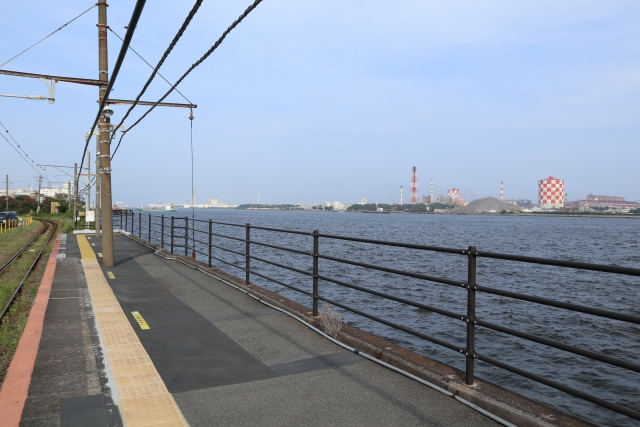 I tried to take a picture of the entrance, but it was prohibited.

The only place that ordinary people like me can enter is Kaishiba Park next to the station.

The park is long and narrow and not very spacious, but you can still enjoy the sea breeze and be a little emo in the city.

It was quite quiet during the daytime.

This Umi Shibaura station is recognized as one of the 100 best stations in the Kanto area.

I was convinced that it would be certified because of the view of the ocean right next to the train.

A return train is waiting for you at the station.

The train you came on on the way to the station will be waiting for you on the way back.
For those who come to Umishibaura Station to take pictures, this may be a common occurrence.

There were several other people who came to take pictures besides me.

It’s still a little-known spot, so give it a try!

Check the timetable if you’re going to Umi Shibaura station!

Umishibaura Station can only be reached by taking the Tsurumi Line from Tsurumi!
And since there are only a few trains, please be sure to check the trains going to and returning from the station before you go there.

If you are not careful, you may end up waiting in the park for 2 hours.

And I heard that there is a rule that you are not allowed to point your camera toward the Toshiba building.

What's good about Shimonada Station? Have you ever heard of Shimonada...