Narita Express, one of the access trains connecting the Tokyo metropolitan area and Narita Airport, is subject to A express fare, which makes the express fare expensive.

when the limited-time discount ticket “Value Ekinet Ticketless Limited Express Ticket” is offered, the ranking may be reversed for some sections. Also, if children are included, use your best judgment. The following explanation is based on the example of Tokyo-Narita Airport. 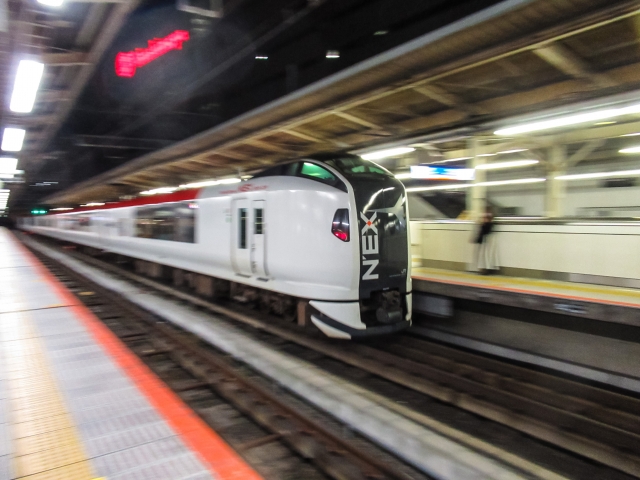 What is Narita Express?

The Narita Express is an express train operated by JR East connecting Tokyo and Narita Airport.

With the largest demand for international flights in the Tokyo metropolitan area, the Narita Express has become a popular access train to Narita Airport, where LCCs have been active in recent years.

It basically runs nonstop from Tokyo Station to Airport Terminal 2 Station, but some morning and evening services also stop at intermediate stations to meet the demand for seated commuting in the Chiba area.

Its competitor is the Keisei Skyliner, which runs between Ueno/Nippori and Narita Airport.

Narita Express is more expensive than the Keisei Skyliner in terms of fare.

While the Narita Express operates via the Sobu Line in a slightly roundabout way, the Keisei Skyliner operates almost in a straight line, with some sections running at 160 km/h, the fastest speed on conventional lines.

While the Keisei Skyliner’s gateway is basically Ueno and Nippori, the Narita Express takes advantage of the extensive JR line network to pick up passengers not only in Tokyo but also at Shinagawa, Shinjuku, Ikebukuro, Omiya, Tachikawa, Hachioji, Musashikosugi, Yokohama, Ofuna and too many other stations to mention.

Narita Express is convenient for some uses.

Although Narita Express is convenient, you have to pay 1,730 yen for express fare!

This is because the highest grade, A express fare, is applied to the Narita Express express fare calculation.

The cheapest way to ride

The Narita Express is too expensive to ride normally, but it is possible to ride it at a discount if you invest in other means. Please refer to the following information to find out how to do so.

The key point is that the regular express fare will be applied as is to the more expensive Narita Express.

What are the A express charges?

The original express fare structure is totally ignored. Since you only use points based on the distance traveled, it is a very economical way to use JRE POINT.

For example, a ticketless express ticket using JRE POINT can be issued from Tokyo to Narita Airport for 720 points.

Normally, you need to pay 1,730 yen for the express fare in addition to the fare, so you can see how much more economical it is.

If you do not have JRE POINT, you may want to issue a “ticketless express ticket” from Ekinet, but it is usually only 200 yen off the express fare, so it is much less otaku than using JRE POINT, but more otaku than a paper express However, it is more reasonable than paper limited express tickets. In the example from Tokyo Station, 1530 yen is required in addition to the fare.

However, for a limited period of time, “Ekinetto Tokudane Value” may be applied to Narita Express.

In this case, the maximum discount is 50%, and the normal discount is 35%, which is a very reasonable level.

For use by adults only

Regardless of which station you ride from, “JRE POINT ticketless limited express ticket” is the most discountable without exception under normal circumstances. However, if you add the Ekinet Tokudane (50% discount) and the regular Tokudane (35% discount), which were set only for 3/12-6/30, to the comparison chart, the price may be reversed for some sections.

Since JRE POINT is usually worth more than 1 yen per point, it may be a wise choice to purchase “Ekinetto Tokudane Value” even if the price is a little higher to save points.

For use by children

Regular express fares on Narita Express are higher during peak periods and lower during off-peak periods, but the number of Tokudane and JRE POINT points required is the same throughout the year.

It should be noted here that the fare between Tokyo and Narita Airport is significantly lower.

A ride on the Keisei Skyliner from Ueno to Narita Airport costs 2,520 yen, so…it easily beats that.

If you live along JR East, take this opportunity to use your JRE POINT savings, and even if you don’t use JRE POINT, we hope you will take advantage of the information on the N’EX round-trip ticket.