Gunkanjima has been officially recognized as a World Heritage Site.

So, what is Gunkanjima like? How to get there? How much does it cost? What are the precautions? We have compiled a list of the things you may be wondering about.

We have also compiled an amazing video taken by a drone. Please enjoy.

The area has become a national tourist attraction, having made its Hollywood debut as the model for the movie Skyfall, and as the filming location for the live-action version of Shinkage no Kyojin (The Titans).

It has also been officially registered as a World Industrial Heritage site by the United Nations Educational, Scientific and Cultural Organization (UNESCO), and many tourists visit the island to catch a glimpse of it.

Incidentally, Gunkanjima can also be seen from land. This article is also recommended.

Gunkanjima｜4 recommended spots where you can see from land! A roundup of places you can see beautifully without going ashore on a tour! 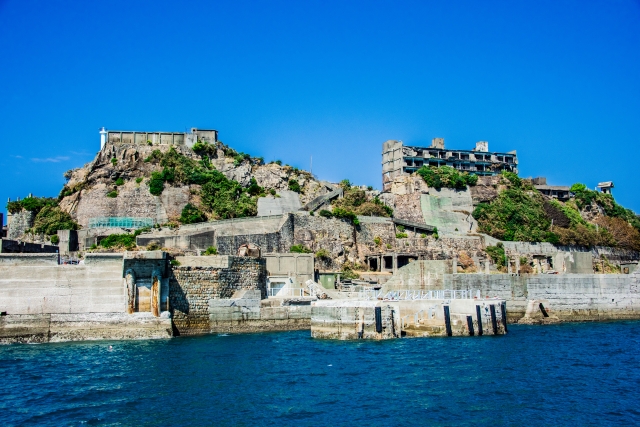 Gunkanjima is an island located in Nagasaki City, Nagasaki Prefecture. Its official name is Hashima Island.

The small island was a state-of-the-art place, complete with a police station, elementary school, rooftop amusement park, pachinko parlor, and even entertainment facilities such as a movie theater. 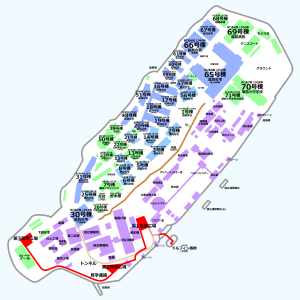 However, when the coal mines were closed in 1974, everyone left the island, and it is now uninhabited.

The name “Gunkanjima” comes from the island’s resemblance to the warship “Tosa” in its appearance, with its wharf surrounding the entire island and lined with high-rise reinforced concrete buildings.

The island looks so much like a warship that there are rumors that the U.S. military actually mistook the island for a warship and attacked it during the war.

The drone video of Gunkanjima is amazing!

Right now, tours of Gunkanjima are being offered, and although it is possible to land on the island, it is not possible to enter the buildings due to the danger of collapse caused by the aging of the buildings.

Enjoy a video of what it looks like inside.

Here is a video taken by the Nishinippon Shimbun

Here is a video of 3D data of Gunkanjima created by the team of the Center for Infrastructure Longevity and the Gunkanjima 3D Project, Graduate School of Engineering, Nagasaki University.

The Gunkanjima 3D Project is a project to record, preserve, and manage Gunkanjima using the research techniques of the Center for Infrastructure Longevity, which has been conducted by the Center since FY2009.

In 2014, at the request of the City of Nagasaki, we created 3D data of the entire Gunkanjima from aerial images taken by 3D laser scanners and unmanned aerial vehicles (drones) (hereafter referred to as “Gunkanjima 3D”).

It is amazing that every detail has been reproduced so well!

Since Gunkanjima is currently weathered and damaged, it is expected that this 3D data can be used to study how much erosion and damage has progressed.

How to get to Gunkanjima

For those of you who would like to actually go there, here are directions on how to get there.

Gunkanjima cannot be entered by individuals on their own.

Until the island became famous, local fishermen used to take visitors there, but now it is not possible to go there except on a tour.

Please note that advance reservations are required and a consent form must be submitted.

You can download the consent form from the tour company’s website and bring it with you, or you can fill it out at the reception desk on the day of the tour.

In addition to this fee, all of them require an additional facility use fee of [300 yen for adults and 150 yen for children].

This is another 150-minute course.

In this tour, the guide will carefully explain various aspects of the tour.

It is reputed to be quite an interesting story.

It is a good idea to listen to the guide’s stories and enjoy the long boat ride on the Gunkanjima landing tour.

This course takes about 3 hours.

The good thing about this tour is that it is the only tour that allows you to land not only on Gunkanjima but also on Takashima.

On Takashima, you can see a model of Gunkanjima at the Coal Museum.

However, this tour only takes you ashore on Gunkanjima and does not allow you to enjoy a round tour of the island.

If you want to enjoy the shape of a warship from the sea, another tour company may be better for you.

A map of each company’s embarkation locations are here. ↓↓

First of all, high heels and sandals are not allowed ashore.

It is best to wear sneakers or comfortable shoes.

Wear clothes that are easy to move around in.

Also, an important point is that umbrellas are not allowed, so be sure to bring a raincoat in case of weather conditions.

According to Nagasaki City ordinances, it is not allowed to go ashore on days with strong waves (0.5 meters or more), strong winds (5 meters per second or more), or poor visibility (500 meters or less).

If you cannot go ashore, the tour will be changed to a circular tour.

In such cases, the tour fee other than the 300 yen facility fee will still be charged.

(Yamasa Shipping will refund 10% of the tour fee.)

Looking at the annual landing rate, there may be many days during the summer when landing is not possible due to typhoons and other factors. 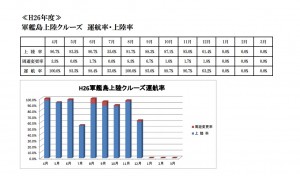 There are no restrooms on Gunkanjima, so use the one at the waiting area or on the ship.

Some boats have only one restroom, so be sure to use it beforehand.

Even though it is close by, Gunkanjima is in the open sea, so the boat may rock.

Did you enjoy this article?

Gunkanjima is the talk of the town right now! I would love to go ashore once, with a solid plan in place.