There was a flaming fire in front of me, and the flame went straight. The sparks fluttered and the hot air blew toward the audience. If you watch a burning torch at close range, you will be shocked by the strong fire. 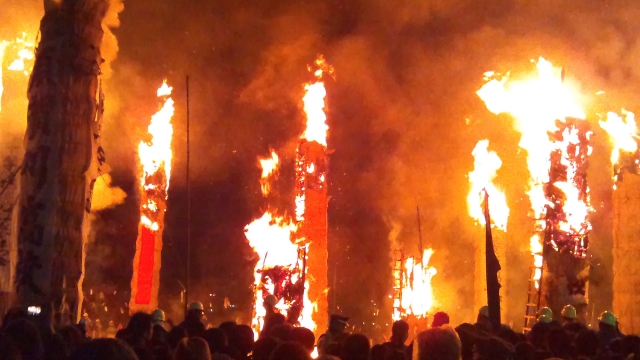 “Songming Torch Festival” is a fire festival held in Wakayama, Sukagawa City, Fukushima Prefecture in the first half of November. It has a history of more than 400 years and can be traced back to the 17th century where the warriors aimed to unify Japan and fight bloody battles. It is also a battlefield near Sukagawa, and it is said that this festival was held by local residents to comfort the souls who died in the war.

The burning torch is called the big torch, the largest torch, about 10 meters high and weighs about 3 tons. About 30 big torches will be prepared in recent years. At 1:30 pm on the day of the ceremonies, these big torches will be unveiled. With the screaming of “Wow Huey, Wow Huey”, a group of people lined up and moved the torch into the venue.

It is the maker of the torch that carries the torch. In addition to businesses and groups, schools and others will participate. The authors follow the traditional methods of production and pursue the aesthetics of “burning in one breath and collapsing with burning”, which is constantly improving every year. At 6:30 in the evening, the torch was finally lit. With the rhythm of the ceremonial drums, these big torches are burning together.

On the day of the festival, a shuttle bus service will be charged from the Sukagawa station, the Mondong parking lot, the Sukagawa city cultural center to the venue from the front!