Hirosaki Castle and Sakura are representative of Japan’s famous scenery, and are selected by the country as “100 selections of Japanese cherry blossom spots”, “100 choices of Japanese landscapes intertwined with nature” and “100 cities in Japan”. The first planting of cherry trees around Hirosaki Castle was 300 years ago. 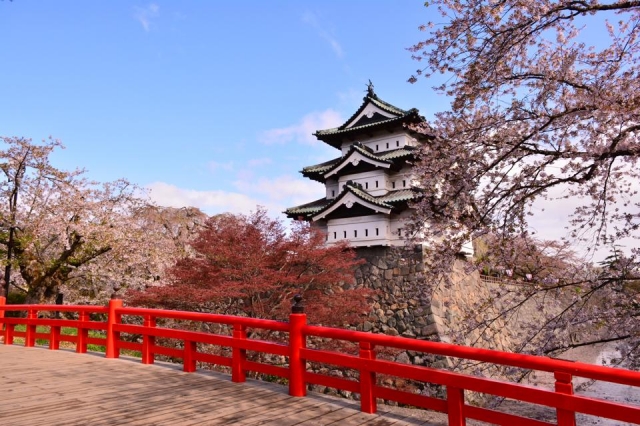 Although it was once ruined, from about 100 years ago, the number of cherry trees increased because of many people’s donations, and it has become a scene today.

In the blooming period from the end of April to the beginning of May, in addition to the “Hiroshi Sakura Festival” held in Hirosaki Park, it is packed with taxis and vendors, and the atmosphere is lively and extraordinary.

Why is the cherry blossoms in Hirosaki Park beautiful?

The reason is the introduction of the famous product – apple pruning technology. Once, the local apple farmer used this method to trim the weak old cherry trees. After the next year, the trees restored the leafy appearance and opened more beautiful flowers. In the sakura flower buds of the sakura, it is 5 to 7. 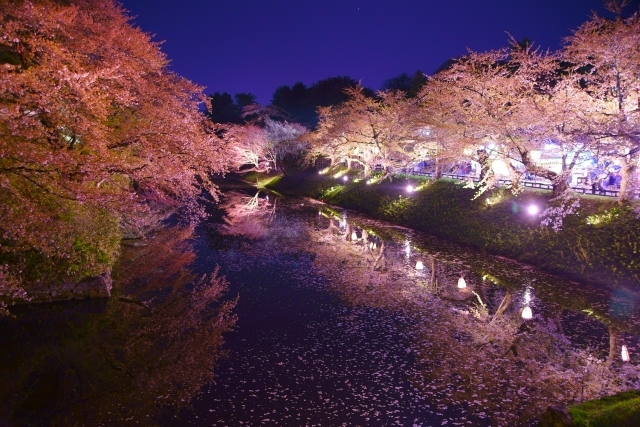 As the amount increases, the momentum is generated, and the branches hang down because of the weight of the flowers, and the tree shape becomes beautiful. The cherry blossoms of Hirosaki grew up with the wisdom and care of the local people and became a form of culture.

About the transportation to Hirosaki, take the Tohoku Shinkansen from Tokyo to Aomori for about 3 hours and 20 minutes, and then transfer to Tsugaru for about 30 minutes to arrive at Hirosaki Station.

From Osaka, take the flight to Aomori Airport for about 1 hour and 30 minutes, then take the bus for about 55 minutes to arrive at Hirosaki Station. From Hirosaki Station to Hirosaki Park, walk for about 30 minutes or take a taxi for about 10 minutes. Tickets are required for the trip to Benmaru (the central part of the castle), 310 yen for adults and 100 yen for children (under 15 years old).

Hiroshima Park started the repair of the Maruishi wall from 2014. The construction period is 10 years. After the completion of the Hirosaki cherry blossom festival in 2015, the project is officially launched, so it is the attraction that you hope to visit before that.