Do you know?Even Tokyo has unexplored stations!

It is an above-ground station with a single platform and one line . The station building is located on the Tachikawa side of the platform, and a station certificate issuing machine is installed. A post box is located across the railroad crossing in front of the station, and there is a public restroom managed by the town of Okutama on the platform near Okutama. There is a level crossing right next to the station, and both ends are separated by a tunnel. Ome Station is an unmanned station managed by Ome Station and has a simple Suica ticket gate.

Even in Tokyo, there is abundant nature! 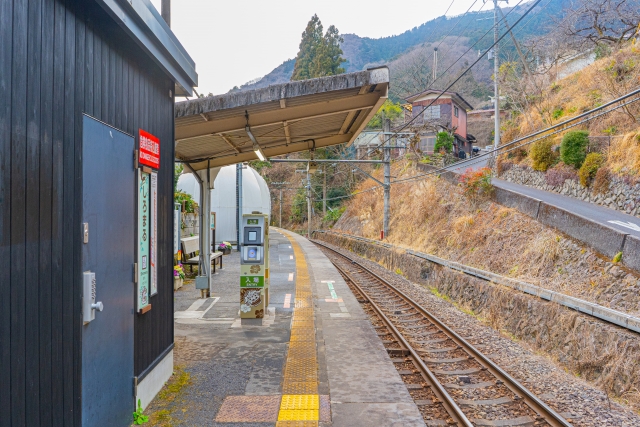 It is called Shiromaru Station.

It takes about 2 hours from Tokyo Station

You can get there by going to Ome station and taking a train bound for Okutama from Ome station.

I rode from Shinjuku station and came to Ome on the way!

My back was sore from sitting all the way…

And from here, I will be on the train for another 30 minutes…

I took the train bound for Okutama and headed for Shiromaru station, wondering which would come first, whether I would arrive at Shiromaru or my back would explode!

Getting off at Shiromaru Station

The station was completely in the mountains!

The station name markers and the station building were well maintained.

Touching the PASMO card to the simple ticket gate at the unexplored area of the station.

There is no automatic ticket vending machine at this Shiromaru station, and you are issued an orange boarding pass, which you hand over at the station where you get off.

On the other hand, the ticket to this station is put into a box where you can put in your ticket.

So, it is easier to come here after charging your IC card!

It is a very unexplored station, but there are about four trains per hour, both up and down, coming to this station.

It is a surprisingly busy station.

Time limitation in this way!

It is good to spend a few hours exploring, but it is also quite fun to set a time limit until the train arrives.

Have you heard of the Laview express train that operates on the Seibu ...

Did you know that there is a station on the Keisei Line that is consid...