It is located at the foot of Higashiyama Reiyama, northeast of Yasaka Hogansa Temple. It was formally known as Gautai Shoushozenji Temple and was built in 1606 by his wife, Kitamasa (Ningning, who became a monk and was known as Takadaiin Hogyue), to pray for his welfare after Toyotomi Hideyoshi’s death. In July 1624, the monk Mie of Keninji Temple was invited to be the founding monk of the temple, and the temple was renamed koudaiji. 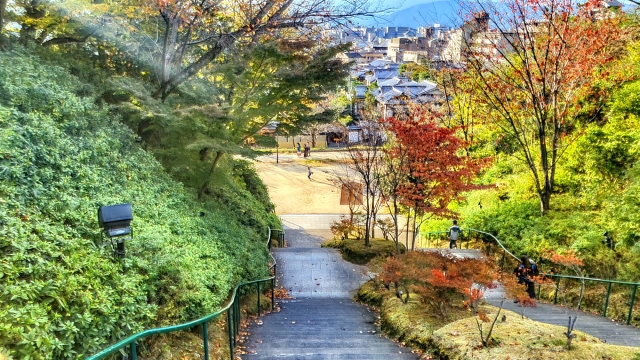 The temple was built with great financial support from Ieyasu Tokugawa, who was concerned about the political situation at the time, and the temple was therefore built in a magnificent manner. The existing Kaisendo (formerly the Hall of Buddha-bearers), the Spiritual House, the umbrella pavilion, the Tokyu-tei, the Table Gate and the Moon Viewing Platform are all important national cultural assets.

Hideyoshi and Hokusasa were enshrined in the Reikoya, and beneath the statue of Hokusasa is the site of his tomb. The Surya altar (Buddha’s throne) and the Buddha’s niche are decorated with magnificent maki-e (clay and gold painting), which is representative of the artworks of the Momoyama period and is widely known as “koudaijimaki-e”.

The pond garden, which extends east and west with Kaisando as its centre, is said to be the work of Kobori Tonshu. In addition, Toyotomi Hideyoshi’s wife (Hokusasa) was appointed to the first rank in the 16th year of the Tensho era, and was given the title of koudai-in by Emperor Goyosei in 1603, and died on the 6th September 1624 at the age of 76.

From Hankyu Kawaramachi Station or Kyoto Gion-Shijo Station, take city bus 207→get off at Higashiyama-Yasui stop. 7-minute walk to the east.

Manpukuji Temple in Kyoto Japanese law is very tolerant of social or ...

The park has been designated as a national natural monument. There ...