The line runs from Goryo Station, the starting point, to Biwako Hamadotsu Station near Lake Biwa, across Mt. From Goryo Station, the line connects directly with the Kyoto Municipal Subway Tozai Line, which runs to Ohata Tenjingawa Station, and connects with the Ishiyama-zaka Main Line at Biwako Hamaotsu Station, the terminus of the line. As a result, the line serves as an intercity transportation service between central Kyoto City and Otsu City. The entire line runs parallel to the JR Tokaido Main Line (Biwako Line), but the Kyotsu Line is inferior to the JR Tokaido Main Line in terms of fares, time required, and number of trains in operation. 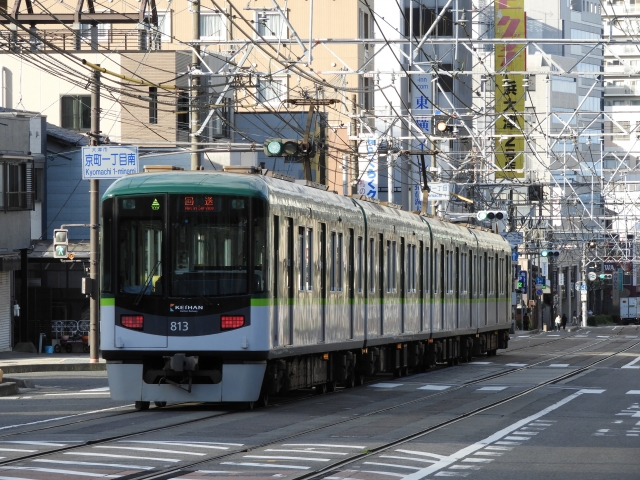 At some stations, platforms are forcibly built on steep slopes, and some trains stop at an angle that is not obviously parallel to the platform. The Keihan Keihan Keihin Line is rarely referred to as a “mountain railroad” in passenger information, but when you actually ride the line, you can clearly see that the tracks are laid on a difficult terrain, much like a mountain railroad.

The train goes up and down repeatedly, passing Kami Sakae-cho, one step before Biwako Hamaotsu, and gradually entering the city center of Otsu.

The Keihan Keihan Keizu Line is, for the last time, being transformed into a streetcar!

The section is only a few minutes between Kami Sakae-cho and Biwako Hamaotsu Station, but the train is indeed running on the road. The train that ran as a subway earlier, and then crossed Mt. Osaka as a mountain railroad, is now a streetcar. 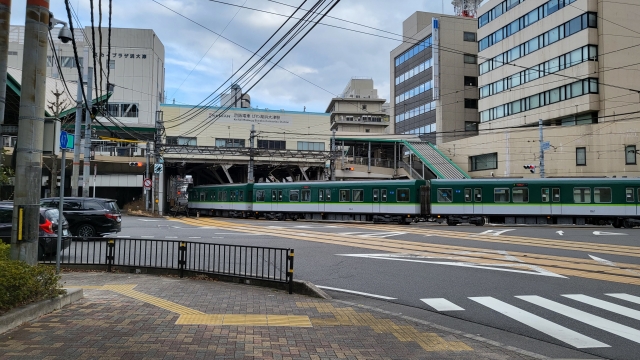 After the section that looks like a mountain railway, the last section between Kami Sakae-cho and Biwako Hamaotsu is a shared section with the road, and is the only section in Japan where four-car trains run on the road.

This is because the total length of four-car trains on the Kyotsu Line is completely “against the law” as a length of train cars running on a shared section of road. The Keizu Line is allowed to run on this section as a special exception.

About Otowa Waterfall Located at the back of Kiyomizu Temple, at the ...

Along with Nagasaki Electric Railway, it is a rare Japanese railroad c...

Limited Express Shiosai is the train from Tokyo Station via the Sobu M...

Osaka and Kyoto are both popular places to visit in Japan, and they ar...