One of the world’s largest indoor aquariums, the Kaiyukan, located in Osaka’s Tenpozan, is themed around the Pacific Rim Volcanic Belt and Life Belt, recreating the natural habitats of the different regions surrounding the Pacific Ocean. Among them, the large tank in the center displays whale sharks, which are the most popular animal stars in the Kaiyukan. 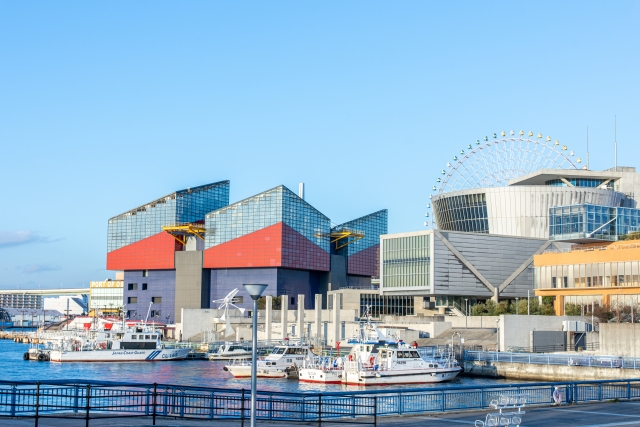 Although there is no animal show in the Seawalker, the 620 species of more than 30,000 creatures of all shapes and sizes on display are still spectacular, including not only a variety of fish, but also amphibians, reptiles, birds, mammals, as well as invertebrates and plants.

When you enter the Kaiyukan, you will see a large model of a whale shark, and many visitors take pictures with it. You can rent a Chinese audio guide with a display for 500 yen at the desk. 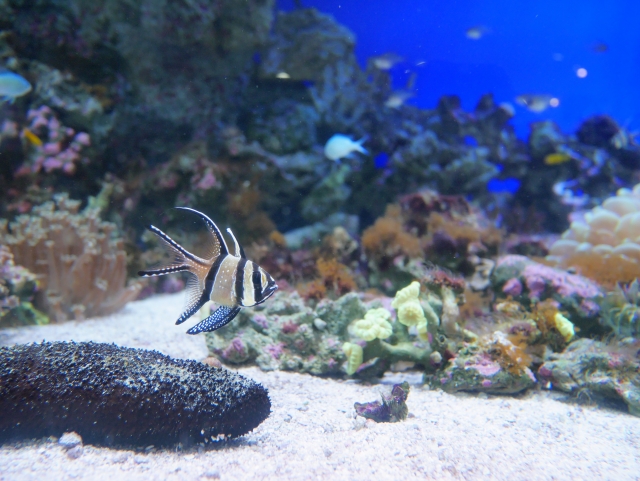 From Osaka Airport (Itami Airport)
Take the Osaka Monorail to Hotarugaike Station, take the Hankyu Takarazuka Line to the last stop, Umeda Station, and walk to Osaka Station. Thereafter, follow the above directions from JR Shin-Osaka Station and Osaka Station.

From Kansai International Airport
Take the JR Kansai Airport Rapid or JR Hanwa Line to Tennoji Station. Change to the Osaka Loop Line outbound at Benten-cho Station, change to the Subway Chuo Line bound for “Cosmosquare” and get off at “Osaka Port” (2nd stop).

Next is a wonderful journey to the sea. The first thing you enter is the “Fish Crossing – Watergate”, a tunnel-shaped tank in which colorful fish swim around above your head, including the cute devil fish, super cute. Walk out of the tunnel, take the elevator up to the highest level, and then start to follow the central tank back down, layer by layer down the tour. Some of the tanks span several floors, so you can observe the creatures at different depths and from different perspectives.

The top floor starts with the “Japanese Forest”, where the various creatures at the water’s edge and the fish in the streams show the natural ecosystem of the forest, and you will see small-clawed otters, giant salamanders, red-spotted salmon and other animals. After that, you will go down the stairs and walk through the dark passage to the water tank display area.

The “Aleutian Islands” tank recreates the environment of the cliffs of the Aleutian Islands, where the sea otters live in a very cute way. In the “Monterey Bay” tank, there are California sea donkeys and big-toothed seals. The “Gulf of Panama” tank shows the tropical dry forest of Panama during the dry season, with animals such as the six-spotted puffer fish. The elephant fish in the “Ecuadorian Rainforest” tank is one of the largest freshwater fish in the world.

In the Antarctic continent, you can observe the king penguins, Gentoo penguins (gentleman penguins) and rockhopper penguins, who jump into the water to swim and climb up to the shore with their slippery appearance. The “Tasman Sea” tank features Pacific spotted dolphins, which chase and play in the water, and occasionally leap out of the water with super fast movements. The “Great Barrier Reef” tank is filled with a variety of brightly colored tropical fish, which is quite spectacular.

You can also see lobsters, octopuses, red turtles, Japanese spider crabs, and jellyfish of various shapes and sizes. If you come here at night, you will also have the opportunity to see the animals sleeping in a cute way.

One of the attractions in Osaka is the Kaiyukan, which is located a bit far away from Osaka Port Station on the Chuo Subway Line. It was a Sunday, and even though it was raining heavily, it was crowded with people, so it seemed to be very popular among the locals.

The biggest attraction of the museum is the large fish tank in the center, which is several stories high, and the original path goes all the way down and around the tank, allowing you to see various kinds of fish from many angles. The most special must be the giant in the tank – whale sharks, and a variety of devil fish. Towards the end of the tour, there is a special part, first you will see various language signs, reminding visitors to wash their hands first, then you will see the open fish tank, you can touch the small sharks and devil fish.

After seeing the Seawalker, there is also the Tenpozan Shopping Center nearby.

Universal Studios Japan is a must-see tourist attraction in Japan, and...

About Tennoji Zoo As a zoo has been built up to a hundred years, Tenn...

About Osaka Japanese Folk Art Museum After the fall of the 1970 World...