Ise Jingu (Ise Jingu) is a Shinto shrine located in Ise City, Mie Prefecture, Japan. Its official name is “Jingu” without the place name (Ise), and it is commonly called Ise Jingu to distinguish it from other shrines.

It was one of the top seven shrines among the 22 Shinto shrines during the Heian period (794-1185). It is also one of the first shrines to have never conferred divine rank. In ancient times, it was regarded as one of the two shrines, along with Usa Jingu Shrine and Ishimizu Hachimangu Shrine in the Middle Ages. In the modern shrine ranking system from the Meiji era (1868-1912) to before the Pacific War, it was considered a shrine above all other shrines and was exempted from shrine ranking.

I have visited many shrines and temples in my life, but personally, the atmosphere here is something else!

Did you know that there is a way to visit Ise Jingu Shrine?
If you know about it but are not familiar with the details, this article is perfect for you.

I am going to write about the Ise Jingu Shrine for those who are interested in visiting the shrine. Please refer to it as a reference for your visit to Ise! Let’s go!

The way around Ise Jingu Shrine that I will introduce in this article is written simply for those who make a trip. It would be very difficult to write about visiting Ise in detail, so I will only write about what you need to keep in mind.

How to go around Ise Jingu Shrine 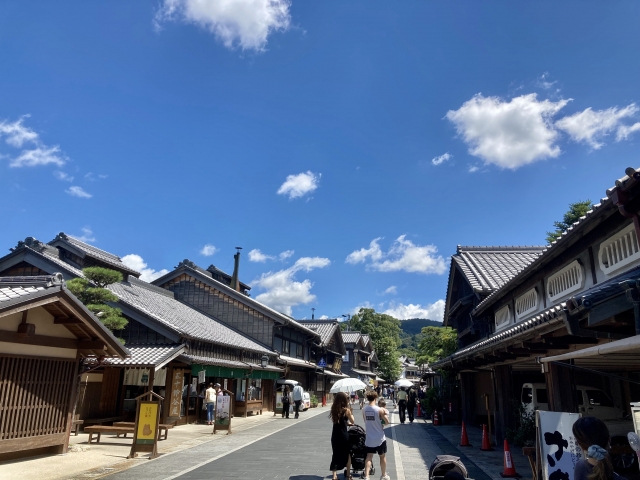 It is considered a good idea to visit the Ise Jingu shrines in the order of Outer Shrine and then Inner Shrine.

To be more precise, the Ise pilgrimage starts from Futami Okitama Shrine, but that is a bit difficult, so it is considered acceptable to go from Ise-shi Station to the outer shrine.

I’m pretty sure the official Ise Jingu page lists a model course that starts at the Outer Shrine!

At the Inner Shrine, first cross the bridge to purify your hands.
After that, you can go around the Inner Shrine in the following order: Shomiya (Amaterasu Omikami), Arasakimiya (separate shrine), and Kazanomiya (Wind Prayer Shrine)!

At the very least, you will be fine if you visit the Shomiya and the Bekumiya.

Here’s a rundown of everything you need to know before you go!

You should visit the Outer Shrine before visiting the Inner Shrine.

Ise Jingu has an outer shrine and an inner shrine, and the inner shrine is more crowded than the outer shrine.
The approach to the Inner Shrine of Ise Jingu is called “OHARAIMACHI, Okage Yokocho” and is lined with a variety of stores.

In the first place, it is proper to go to Ise Shrine from the Outer Shrine.

It is said that visiting only the Outer Shrine or only the Inner Shrine is called kata-sangu (one-sided visit), which is bad luck and should be avoided!

This means that when you visit Ise Jingu, be sure to properly greet both deities!

Bow lightly before the torii gate of Ise Jingu Shrine!

Ise Jingu Shrine is quite large and has quite a few torii gates.
Although it is not limited to the Ise Jingu Shrine, it is good manners to bow lightly in front of each torii gate since you are intruding on the grounds of the gods!

Of course, don’t forget to bow on your way back!

Do not walk in the middle of the approach to the temple.

To enter the grounds of the Outer and Inner Shrines of Ise Jingu, visitors cross the Hiyokebashi and Ujibashi bridges, respectively.

It is the path of the gods, so we, the worshippers, should walk on the edge!

Shogu is a place to give thanks, not to ask for favors!

The Outer Shrine and the Inner Shrine each have a main building called Shogu (the main hall in a temple).

In fact, you are not allowed to make requests here.

Although the Shogu gives a strong impression of a place to ask for favors, the Ise Jingu is a place to express daily gratitude. So, basically, you are not allowed to make a request.

After your name and address, express your daily gratitude!

No need to make a money offering at Ise Jingu!

Actually, you don’t have to make a monetary offering at Ise Jingu.

Most people throw money into the Shogu and Bekumiya as well, but really all you need to do is to visit the shrine.
You should not throw money that you have as a human being into the sacred place where God resides.

As proof of this, the place where money is thrown is covered with a white cloth so that no money falls directly on the site!

They do have a money box, but it’s not necessary to throw money into it–basically!

If you wear formal attire and bring 1,000 yen, you can make a special visit to the shrine.

When you visit the main shrines of the Geku and the Naiku, you may see people in suits praying closer to the deities than you are.

In fact, you can enter that area if you meet certain conditions.

You can get the special Sangu emblem by making a donation to the Shikinen Sengu (Shrine relocation ceremony) at the place where amulets and money is sold.