In fact, this shrine is a “sea-viewing shrine” with a panoramic view of the ocean from its precincts!

Fukutoku Inari Shrine is located in Toyoura-cho, Shimonoseki City, Yamaguchi Prefecture. The magnificent shrine stands on a hilltop at Inunaki Pass in the middle of Route 191, commonly known as the Nishinamon Blue Line, which runs along the coastline.

It is known for its beautiful sunset view from the shrine grounds. The streaks of light from the setting sun on the western horizon stretching toward the Otorii (Grand Gate) are quite magical. The Senbon-torii (Thousand torii gates), known as “Kaiun-torii,” are also famous, and as you pass through the tunnel of torii gates, the blue of the sky and the sea spreads out.

What is Fukutoku Inari Shrine? 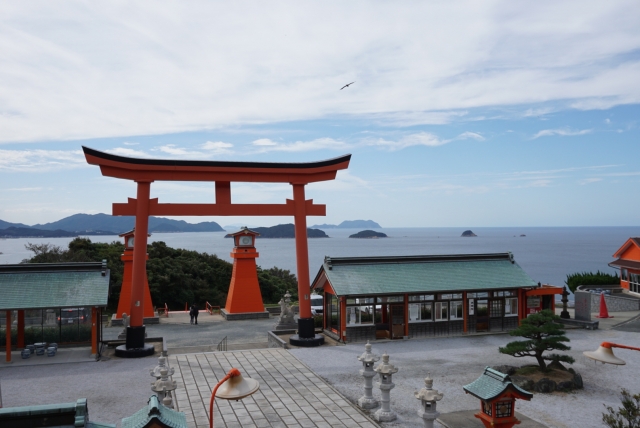 This shrine is located in Shimonoseki City, Yamaguchi Prefecture. The shrine has long been worshipped as an Inari-sama of good fortune, prosperity, safe voyage, and good catch of fish.

Hatsumode (New Year’s visit to the shrine) and the 23rd day of the 5th lunar month (the 23rd night of the 23rd lunar month) are especially popular among worshippers.

Walking around the shrine grounds

Fukutoku Inari Shrine is located on a steep slope. Therefore, you can enjoy a panoramic view of the Sea of Japan from the shrine grounds!

Since it is an Inari shrine, a statue of a fox welcomes you!

There is nothing around the shrine but the sea and mountains. First, head for the shrine pavilion and pay your respects.

Fukutoku Inari Shrine is quite easy to reach by car, as the entrance to the shrine grounds is located along Route 191. From the center of Shimonoseki, it takes about 45 minutes to get there.

However, if you do not have a car license and would like to go by train, it is difficult to get there!

To get there from Shimonoseki Station, first take the San’in Line to Yutama Station, the nearest station to the Fukutoku Inari Shrine.

It takes less than one hour from Shimonoseki Station.

From there, it is a 20-30 minute walk along a national highway with no sidewalks to reach the shrine.

The walk does not end when you arrive at the shrine. You have to climb up a steep hill on foot.

After climbing that hill, you will finally reach the entrance to the shrine grounds! If you want to go, I strongly suggest you drive!

Summary of things to keep in mind to visit Fukutoku Inari

There were a few things to keep in mind before going to Fukutoku Inari Shrine!

1) Don’t stand in the middle of the approach to the shrine and take pictures of the main shrine and torii gate.

(4) Even in Shimonoseki City, it is quite far from the center of Shimonoseki.

Please keep this in mind if you are thinking of visiting Shimonoseki!